Silas and Kit-Kaat continued their exploration of the Redshift Rapture, the derelict the party discovered in the last episode. The ship was still powered down. After finally finding main engineering and the human corpse of Chief Engineer Quyn Jett with a hole blasted through him, they found maintenance tunnels that led back to a manual override for the horizon reactor. With Quyn’s security multipass Silas managed to power up the ship.

In the meantime, iZac pulled the ship around to the open cargo bay and using vaccsuits they scavenged from the Rapture’s airlock, Kavita and Tor proceeded to explore the bay. They discovered dings and scrapes and bits of scraped paint like something blasted out of the hold. The doors were severely damaged where they met the hull.

Inside, Silas saw that systems displayed as nominal except for cargo bay 1 and the hyperdrive shunts. He continued to explore the derelict with Kit-Kaat. They discovered internal holds with rations and water and in cargo bay 2 a large cylindrical tube with a faint power and vital statistic readouts. Three of the seven state rooms looked lived in. One was apparently left quickly, the other two belonged to the two crew. The captain’s stateroom contained his ID, a dolmyranth named Kuarom, and a title to the ship in his name. They moved back upstairs and forward to the control room. There they discovered the corpse of Captain Kuarom with a hole blasted in the back of his head. Curiously, he carried a second ID with the same hologram of him, but the name Derenthi.

In the cargo bay, Kavita and Tor went to work trying to close the bay doors (, HAL). Kavita found the manual override lever and managed crank them shut about a third of the way with brute force. Tor found that hacking the systems were no use, the doors need a mechanic. Between the two of them they forced the manual override lever to budge and got the doors mostly closed but still not enough to pressurize the hold.

In the control room, Kit-Kaat happened to notice a sensor blip. After further examination he determined that it was a small, fast, and heavily armed ship about 20 hours out from the Redshift Rapture’s position. The party scrambled for ideas. iZac laid in a long course back to Finally in their rental shuttle and Tor overrode the autopilot controls to send it off away from their position unmanned. After a quick graviton impeller burst that sent the Rapture in the opposite direction, the team suited up and shut down all systems but passive sensors. After several long hours of pinochle to pass the time they determined that the mystery ship was pursuing the shuttle and powered up again heading back to Finally.

iZac managed to deftly make reentry, even with the damage bay doors, and land the Rapture at the starport in Halcyon on Finally. The ship is in need of repairs and that will probably get expensive. How in the stars will the party pay for it? For that matter, will they be able to even claim salvage rights? 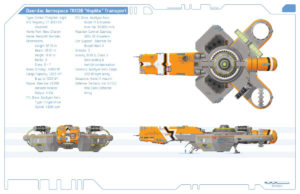 The party left their squat in Crux after concocting a plan to travel to the mysterious object in its polar solar orbit highlighted on Laya Bogana’s navchip. A shuttle rental seemed like a logical choice and the pricing was reasonable. Only two hitches, no money and local news was reporting that several diraks (see below) were loose on the tarmac at the Crux starport, which meant everyone was grounded. The party killed two birds with one stone by taking a job with animal control clearing up the dirak problem at the starport. They also hedged there bets by milking the merchants at the port for more cash to fix the problem.

With iZac driving a borrowed cargo mover the gang set out on the tarmac to attempt to get the diraks to chase them to a pen with waiting animal control and starport staff. After some crazy-bad driving, a few lucky blaster rounds, and Kit-Kaat rocking some awesome mnemonic axe action splitting one dirak in twain they captured three of the diraks that they managed not to kill to the pen. The starport and the merchants paid dearly and our heroes had fare for a shuttle rental, which they promptly attended to. Poor Silas missed out on some betting action among the merchants though.

After a couple of days travel they reached the mysterious object to find that it was a ship, a small transport named the Redshift Rapture. Only a very minor energy signal was coming from it suggesting it was shut down and the horizon reactor was cold. They docked and established a seal between the airlocks. With some quick hacking by Tor they had access. Silas and Kit-Kaat boarded. After cycling the airlock a foul stench of death filled the stale air. With no power on board, they are trying to figure out the best course of action.

A dirak is a large six-legged reptile found in many locations throughout the galaxy. While wild diraks are viscious creatures, they can be domesticated trained as a mount.
Motive: Hungers for flesh; If domesticated, serves as mount
Environment: Wherever they can hunt food, in packs of four to ten
Health: 15
Damage Inflicted: 4 points
Armor: 1
Movement: Short
Modifications: Perception level 5; attacks and Speed defense as level 4 due to quickness; overcoming obstacles and figuring out tricks as level 4.
Combat: When a dirak bites its prey, the victim takes damage and must make a Might defense roll. On a failure, the dirak pins its prey with it’s front claws and the victim must use Might actions and defenses to free itself or the dirak continues to bite and cause more damage during its turn.
Interaction: Vicious, cunning, and a little too smart to be classified as simple predators, these creatures are likely to work in a pack using strategy to corner prey. They will not give quarter, or back off from a fight.

The spectresonant field scanner, or SFS, is a versatile handheld imaging and detection device designed specifically for discovering information about an environment surrounding the user.