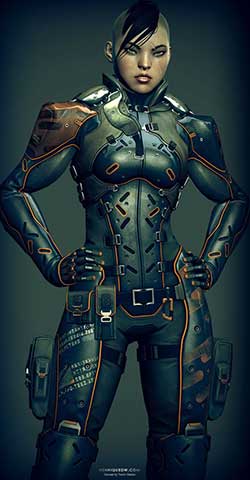 The first step in S4 is creating a character. Character concept is everything. Once you have a concept for your character, work with the GM to make the rules of the game fit that concept. Characters in S4 are built using the Cypher rules. Changes and additions to the Cypher System rules are explained below.

The major difference between the usual character creation sentence from Cypher and S4 is that S4 adds a second descriptor for your species. Like Cypher you still build your character using a simple statement, but it is now:

For example: Aanthor Kesh is a Clever Harvendi Soldier who Needs No Weapons. The descriptor, species, type, and focus you choose will fill out the details and special abilities of your character.

S4 uses Cypher’s three basic stat Pools: Might, Speed, and Intellect. The Pools use Edge and Effort as per the Cypher rules. 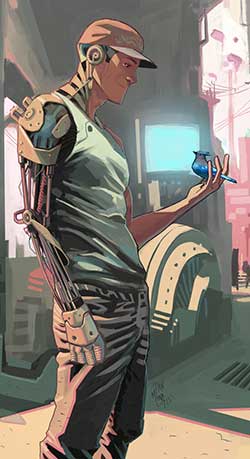 Character type is the core of your character. Your type helps determine your character’s place in the world and relationship with other people in the setting. It’s the noun of the sentence “I am a descriptor species type who focuses.”

You can choose from four character types: soldier (warrior), searcher (explorer), speaker, and savant (adept). Magic does not exist in the S4 universe, but psionic powers do. All references to “magic” in the skills or special abilities listed in the Cypher rules should become “psionics” to suit the setting. If you need help with modifying formerly magic abilities, talk to the GM about customizing the effects to a more psionic flavor.

The table below contains suggestions for flavoring your character type to achieve some of the typical characters found it the S4 setting. You may use any of the suggestions or create your own character concept. As with any flavor addition, discuss it with the GM.

All of the descriptors listed in the Cypher System Rulebook on page 64 are available in S4.

Humans are the default species in S4 and serve as the baseline for character creation. Originally from from the Sol System, they are extremely common across the Orion Spur and Saggit Arm of the galaxy, but can also be found on tens of thousands of worlds beyond.

If you would like to play a non-human species choose from the list below. Rather than using the descriptor as the Cypher rules suggest, species adds an additional descriptor. Non-human species gain one or more advantages at the trade-off of one or more disadvantages. This is similar to the optional mutation rules in Numenera.

Note that all of the non-human species are humanoid. While truly alien species exist in the galaxy, in most cases their psychology and physiology are so radically different from that of the humanoid species that they would be very difficult to roleplay and maintain a cohesive party. If you would like to create a new species for play, humanoid or non-humanoid, discuss it with the GM.

You may choose from one of the following foci listed in the Cypher System rules. If none of these foci work for you, consider the “Customizing Foci” option on page 91 of the rulebook or perhaps discuss creating a new foci with the GM.

Your character can gain training in a specific skill or task and eventually become specialized in that skill or task. S4 has no definitive list of skills. The player is free to create the skills they need within reason. Skills can be very specific or broad. If you have a question about whether a skill fits in the S4 universe or not, consult the GM. 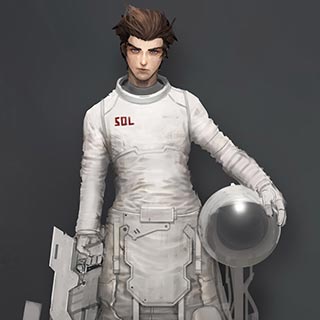 Here are some examples of skills you might choose.

“Ah, visitors… *bzzt* it’s been so very long. I am CaTSI, the Concierge and Tourist Services Intelligence. I will do everything in my power to make your stay comfortable. I live to… *bzzt* …to serve. Perhaps you would like to purchase one of my servebots or workbots for your home? Or maybe secur… secur… CURE… curity is your concern? I have a full range of… *bzzzt POP* range of models ready to fulfill your every need. I just want you… *bzzt* you YOU you you to be happy…”