The map below presents a general view of galactic topography and major settlements across the Milky Way Galaxy. The map is very general and in no way covers the millions upon millions of locations of interest. 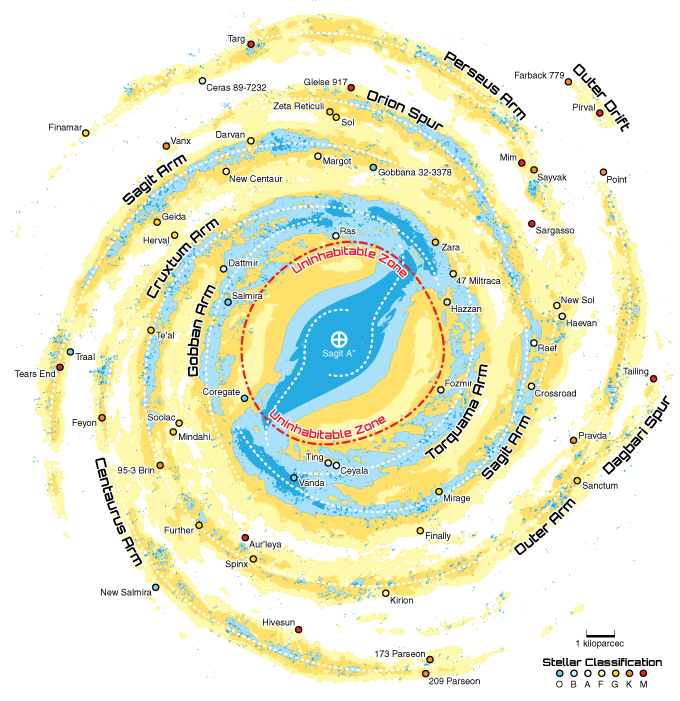 The following is a sampling of star systems that can be found on the Galactic Map. Descriptions and interesting features are included. These listings include the home systems of most of the major sentient humanoid species in the galaxy.

The Aur’leya System’s stars Auri and Leyata are in a wide orbit and each have planets orbiting them. While there is no single star call Aur’leya, the two collectively known by that name.

Planet: Sliat (Auri II)
Population: Several billion
Description: Sliat is a hot world with mild winters. It is the homeworld of the slilan, who evolved in one of the many large deserts of the planet’s equatorial belt. Sliat is a violent world, both naturally and among its people. The slilan are renowned for their fiery tempers and it plays out in their civilization. Sliat is the capital of the Aur’leya System, and its slilan overlords rule with an iron fist when not caught in the midst of a rebellion.

Moon: Sliat Gant (Auri Ij)
Population: Around a billion
Description: Sliat Gant was the first space colony established by the slilan. It is a moon that orbits the gas giant Hubro in their home system. Sliat Gant’s spaceport and its shipyards are renowned throughout the region.

Moon: Yubodan Gant (Auri Ib)
Population: Several million
Description: Yubodan Gant serves as a penal colony and industrial labor world for the Aur’leya System. Criminal and political prisoners from all over the system and beyond are housed at Yubodan Gant. The only way on or off the moon is a single landing field barely equipped to handle starship traffic, let alone the orbital shuttles it was originally designed for.

Planet: Gleit (Dattmir II)
Gravity: 0.5 G
Population: More than 10 billion
Description: Gleit is a cold world riddled with cavern systems. There is a cool temperate belt of forests, deserts, and jungles around the equator. It is the homeworld of the gobbans, the most prolific species in the galaxy. Unlike many species homeworlds, the gobban government on Dattmir is not unified. The three major nation-states on the planet normally share cordial relations but have been known to go to war on occasion. Like their homeworld, the gobban colonies are also disparate, chaotic places.

Planet: Salloc (Dattmir IV)
Population: A few billion
Description: Salloc is famous for its food production, primarily fungi products which are unmatched by gobban farmers on any other world. Even many other species have developed a taste for gobban fungi grown on Salloc. Many gobban colonial settlements exist on Salloc, but Colony 322 is the largest and rules most of the the planet.

Planet: Parzin (Dattmir III)
Population: Several hundred million
Description: Parzin is a strip mine on a planetary scale. The gobban have been mining Parzin since their earliest days of interplanetary spaceflight. It is an incredibly rich minerals and precious metals.

Station: Parzin Paradise (Dattmir III Orbit)
Population: Several million
Description: Parzin Paradise is a gigantic orbital facility run by the gobban. It is a combination trade station, shipyard, casino, and resort. It is considered the origin point of the old adage, “Nobody parties like a gobban!”

Other Locations of Note
Mercury sluice races on Joot, mobile asteroid strip mines in the asteroid belt, and the Gleitanis Reio Academy (a glorified thieves school) on Gleit

Planet: Dolmyri (Raef III)
Population: Several billion
Description: Dolmyri is a hot, dry world dotted with lush jungles, vast deserts, small seas, and rain forests near the poles. Its winters are mild, but its summers can be deadly. Every lifeform on the planet tends to be stout or stocky, this is due to the high gravity of the world. It is homeworld to the four-armed dolmyranth. The dolmyranth culture is egalitarian and proud. They value fairness and honor above all, and defend those values with their lives if necessary. Dolmyri serves as the capital of the system.

Moon: Haet (Raef IV a)
Population: Around 10 million
Description: Haet is a heavily colonized rocky moon orbiting Dolmyri. Haet was mined out centuries ago but serves as a perfect habitat for a major dolmyranth starport and its related shipyards. The moon’s population largely consists of species from all over the galaxy.

Planet: Bodyri (Raef II)
Population: Around 100,000
Description: Bodyri is a scorching, cloud-covered world with a highly acidic atmosphere. It is home to a wide variety of hearty and frightening plant life. Many corporations and governments have bioresearch stations and pharmaceutical labs on the surface. Inhabitants may only leave the protective domes in EVA suits, without them death comes in seconds.

Other Locations of Note
Two asteroid belts have extensive mining operations, and Mynicar Observatory on Harvyn

Planet: Respite (Sanctum III)
Population: A couple billion
Description: Respite is a beautiful world toward the edge of the galaxy that has been claimed by the harvendi. Besides serving as the system capital and a bustling trade center, Respite and its two moons, Center and Hope, are a meditative retreat for the numerous religious cults and monastic orders of the harvendi species. It is also the closest thing they have to a homeworld, having lost track of their original centuries ago. Other species may visit the Sanctum System but they must respect harvendi laws and their claim to it or face the defensive Harvendi Monastic Fleet.

Planet: Locus (Sanctum IV)
Population: More than a billion
Description: Locus is the training grounds for the Harvendi Monastic Fleet. It is off limits to all but those authorized by the government of Respite. Mercantile and other business is conducted on the planet but far away from any sensitive military installations. While other species may enter service in the Fleet, it is extremely rare. The harvendi prefer to contract mercenaries if they need actions performed outside of their own species.

Other Locations of Note
The harvendi treat the rest of the Sanctum System as a nature preserve. Anyone caught engaging in activity that the Monastic Fleet considers desecration of the system will be tried and severely punished.

Planet: Mars (Sol IV)
Population: A couple billion
Description: Mars is a terraformed world that serves as the capital of the Sol System. All governmental and bureaucratic business that needs to be handled in person takes place there. It is a peaceful, libertine world. It serves as home to the Sol System Patrol and the Ares Marshals.

Planet: Earth (Sol III)
Population: Several billion
Description: Homeworld to humanity, Earth is currently, quite possibly, the most backward “civilized” world in the galaxy. The planet has been quarantined by its neighbors for centuries for engaging in reckless imperialism over neighboring planets and systems. No ship is allowed to enter or leave the atmosphere without explicit permission of the Sol System Patrol or Station Alpha.

Station: Station Alpha (Sol III Orbit)
Population: More than 10,000
Description: The primary guard station in orbit around Earth, Station Alpha is primarily a military base for the Earth arm of the Sol System Patrol but also deals as a civilian waystation for the Sol System.

Other Locations of Note
Ceres Station, the Paragon Resort in the oceans Io, Titan Colony, and Outpost Pluto.

Planet: Shornax (Spinx IV)
Population: More than 15 billion
Description: Shornax is the homeworld of the “fixers”, an enigmatic species of centipede like aliens with advanced cloning technology. Species from all over the galaxy visit to create back-ups of themselves as it is the only planet with sufficient enough technology to do so. For this reason, Shornax is surrounded by a cloud of orbital defense platforms and other space stations. The planet’s ring system helps in this regard as gun platforms are built on stabilized boulders in the rings. Getting on and off world is heavily regulated. Getting caught on the planet or leaving without authorization is an instant death sentence.

Station: Gatehouse (Spinx IV Orbit)
Population: A couple million
Description: Gatehouse controls all traffic coming and going from Shornax. Additionally, it is the primary control hub for all system traffic. Ignoring orders from Gatehouse while in the Spinx System will result in imprisonment or death.

Moon: Domix (Spinx Ia)
Population: Tens of thousands
Description: Domix is the advanced research station for the Shornax Clone & Neural Research Concern. It is more heavily guarded than Shornax itself. Even approaching the moon without proper authorization codes will get a vessel shot at, and more than likely destroyed. Domix’s surface is a wasteland thanks to its parent planet, Dox’s, proximity to Spinx. The near unbreathable atmosphere and borderline livable conditions are only maintained because of the strong magnetic field of the planet Dox.

Planet: Spanth (Spinx IX)
Population: Tens of thousands
Description: Spanth serves as a research outpost and space navy base for the fixers. It has an extensive and advanced satellite sensor grid in orbit for early detection of craft entering the system. It controls a vast detection array spread throughout the system’s third asteroid belt. It is an icy world with a corrosive toxic atmosphere.

Other Locations of Note
The first asteroid belt in the system is the only real tourist zone, brought about by necessity and profitability rather than a yearning for visitors by the xenophobic fixers. It houses multiple hotels, resorts, casinos, and entertainments for those doing business in the Spinx System. These amenities are staffed almost solely by robots and their synthetic managers. Traffic to, from, and in the belt is closely monitored by fixer authorities.

The two stars in the Zeta Reticuli System are in a tight orbit around each other. The planets orbit the shared center of mass.

Planet: Zaalhome (Zeta Reticuli III)
Population: More than 10 billion
Description: Zaalhome is the warm, wet homeworld of the zaal, though nearly half the population of the world is human. The zaal have had interstellar flight for millennia. When they found their neighbors, the humans on Earth, they proceeded to treat them like lab animals. Then humanity grew up and invented the hyperdrive. There were wars with the zaal but those are long past. Now, the history of the zaal is inextricably tied to humanity. So much so that bodies in their home system bear human names and their own names for the stars they orbit are long forgotten.

Moon: Orbital One (Zeta Reticuli III a)
Population: A couple billion
Description: Orbital One is a state of the art starport and shipyard as well as serving as galaxy class tourist and recreation center for Zeta Reticuli and other local systems, including Sol. Orbital One also houses a Sol System Patrol base and and Ares Marshal station by order of a centuries old treaty between the zaal and humans.

Planet: Preant (Zeta Reticuli IV)
Population: More than 10,000
Description: Preant has a methane rich atmosphere that makes it incredibly inhospitable to zaal and human alike, the native animal and plant life thrives though. ZetaPharma, a zaal pharmaceuticals venture, holds exclusive contracts to the world and produces drugs and treatments from the native flora and fauna there. Access to the surface is limited to those with company permission granted by ZetaPharma Gatehouse Station in orbit above the planet. Surface excursions require an EVA suit… and a big gun. This makes it a perfect locale for ZetaPharma’s other venture on the planet, exclusive xenobiological safaris.

Other Locations of Note
The annual Asteroid Run race is held in the belt, and Ice Palace on Snowball (Zeta Reticuli VIII) is a popular tourist spot.

— Voice Transmission at the edge of Sol